Puzzle games for years were very popular. No wonder that many developers try to create something new while maintaining the same basis that gives us a lot of fun. Additionally Nintendo Switch become very popular console in a short time so this isn’t new that everyone wants to make their start on Switch – Treasure Stack is a game that come from another Indie Development team and they want to reach top of the cake with their pixel perfect soup.

PIXELAKES gathered all pixels around them, research them in a new way, cook them and make a sweet dish named: Treasure Stack – which is a falling block puzzle platforming game with grapple powered elements. Completely reimagined block puzzle with new gameplay experience, different than existing puzzle game you had a chance to play, and I’m sure of one – that this game will take hours from your life.

I really like puzzle games since I was a kid and played them on Nes/Snes or Game Boy, this is why I feel nostalgic about them and want to try every new one that adds something new and fresh in to old style. When I think about Treasure Stack, few games come in to my mind: Tetris or Dr.Mario so if you played them, you’re familiar with the puzzle blocks concept.
But none of them is that close like Wario’s Woods, released originally in 1994 on SNES and later on Virtual Console for Wii/Wii U/3DS.
Concept was very similar because you had to pickup bombs and enemies and place them on a field. You’ve been doing combos and controlling Toad. At that time that was a big change to existing game experience. 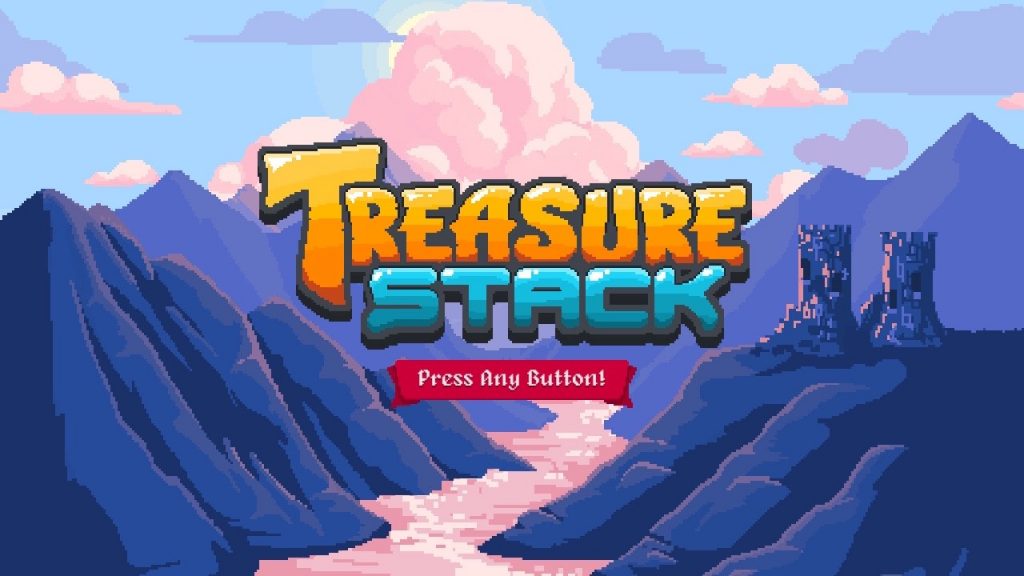 Medieval style, peasants and knights/heroes versus evil powers which always find a way to put new obstacles in front of you and makes your game more difficult.

Your task is simple: stack treasure chests and break them with keys that fall form top and allows you to break a chain. You have to match the same chest colours. You also need to remember that time is an important factor, because if you go slow, you lose, If you do not want to lose, do not let your blocks goes over top line. Besides that you must stand against an additional difficulties – Demon Runes [those black blocks with red symbols on them]. But no worries, you’re not alone, you have powerful grapple that allows you to pickup chests faster, you can walk and jump with a padawan’s grace.

Almost forgot… sometimes a magic powers are so kind to drop you help items. And those are really useful. Here you can have some bombs, anvil, swords and more.  Each item is able to help you in a different way. Ex. Bombs can blow up few chests at a one time, sword can clean everything in a line and anvil – this one breaks through everything and destroys it along the way.. But remember to use them carefully. 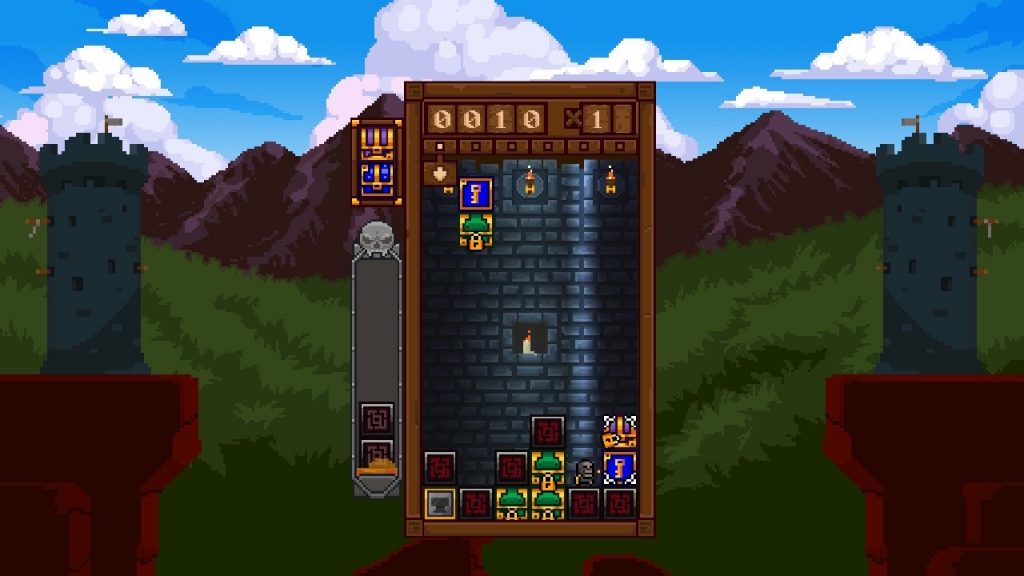 What about controls?
Controlling your character is very easy and intuitive. You feel like you play some sort of platformer game, but with one difference, there is no opponents who’s gonna jump on you. Here you are the only one, falling boxes and Demon entity that puts obstacles on your way.

As I mentioned earlier, game offers you side-scrolling movement. Which means you can walk left-right, up-down and jump.
If you want to use grapple and get falling chests faster, you need to press “button up + A”, remember to stand under the falling crates. Your hero will shoot a grapple that will bring the falling chests in to your hands. When you hold them, you can put them down next to you or under you. To do that press “button down + A” and your hero will stand at a top of the last chest you had in your hands.
If you hold some chests you can easily jump by holding them in your hands. You’re not limited to 1x or 2x chest in your hands. You can pickup whole stack with even 5x of them and move in different place, somewhere close to specific colour of keys that match your chests or away from Demon Runes.

Sounds like we’ve come to the end of the game. But not yet
Game offers you a lot of more than one simple mode. Besides that you can unlock over 100 items to customise your hero and grapple. Which comes in a different style and allows you to clear chests little bit more faster and looks cooler. But remember you’re the main hero and your skills is as much important as a character you control.
If you’re looking for new characters and grapples you have to play, play and again play game. After each time you play it, you end with some amount of coins, level up your character and if you’re lucky, some extra character or grapple comes to you. 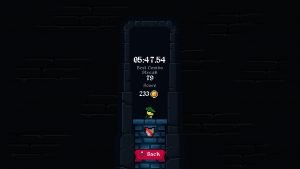 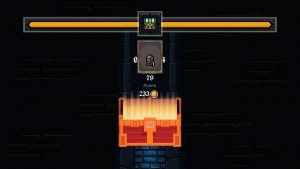 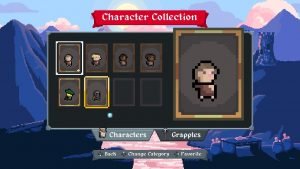 Treasure Stack offers you few modes which will help you keep this game for some time.
You can play: 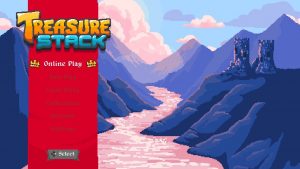 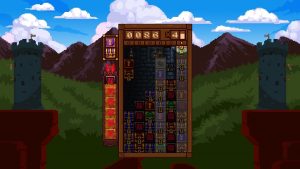 The game is really addictive and well made. Pixel graphic and sound effects bring you some old classic games from Nes/Snes era.
There is not much to say about sound effects because this are simplistic. This was a good decision because I don’t feel if puzzle games need a lot. Neat graphic style and simple sound effects can set you in a proper game mood.

But I found something that really bother me. This is a size of game board in a handheld mode on Nintendo Switch.
This looks really great on a TV and I found this a best way to experience this game. Still handheld mode is great too. I’ve been using it all the time. You can feel that by playing Solo mode and found that there is a lot of unused space which makes game centred in a middle of screen and very squeezed. I understand developers want to make best experience for everyone, even if you play with one, two or 4 players but be honest, most of the time you play solo. Maybe some extra update that makes things bigger for solo players? From the point of accessibility for people with eye sight issues this might be a tiny problem.

Summary
Treasure Stack is a good game. Fun combination of block puzzle game with few extra new bits which brings something fresh. If you like puzzle games and falling blocks, this can keep you occupied for some time. You can play it on Nintendo Switch, Steam [PC], Xbox one and PS4. There is no story mode here, but just a game that allows you to kill some free time.
Good
Bad
8
Great 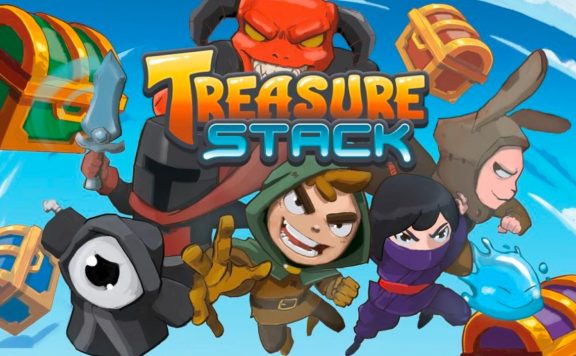 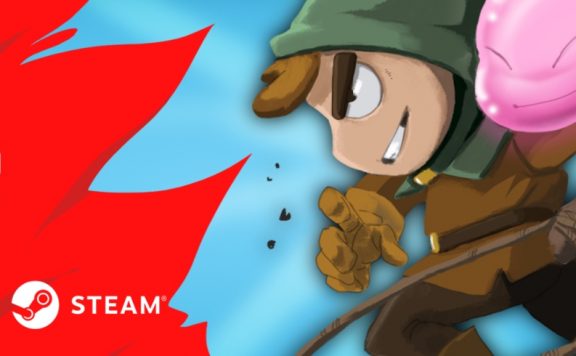